Blync companion app is your first step on setting up your Blync device. Use the app to create your blync account and provide your bicycle details like wheel diameter and minimum weight needed to push down the pedal on your bike trainer. With Blync companion app, you can view your cycling statistics like calories burnt, average speed and maximum power. You can also use the app to view upcoming events, create an event or manage your user settings. Below are supported platforms for Blync companion app.

WINDOWS 10
PLEASE NOTE : If you get a warning during install from an unknown publisher, first verify that the application is from our company (Kinbona Limited) by clicking on more details, then you can disable windows smartscreen to install and enable back.
If you have issues with your windows PC detecting Blync after installing Blync Companion App, download the USB drivers and install from here: https://www.silabs.com/developers/usb-to-uart-bridge-vcp-drivers

Most major VR devices do not support Mac OS. Blync Companion App will be investigated in the future to release with limited support if possible. 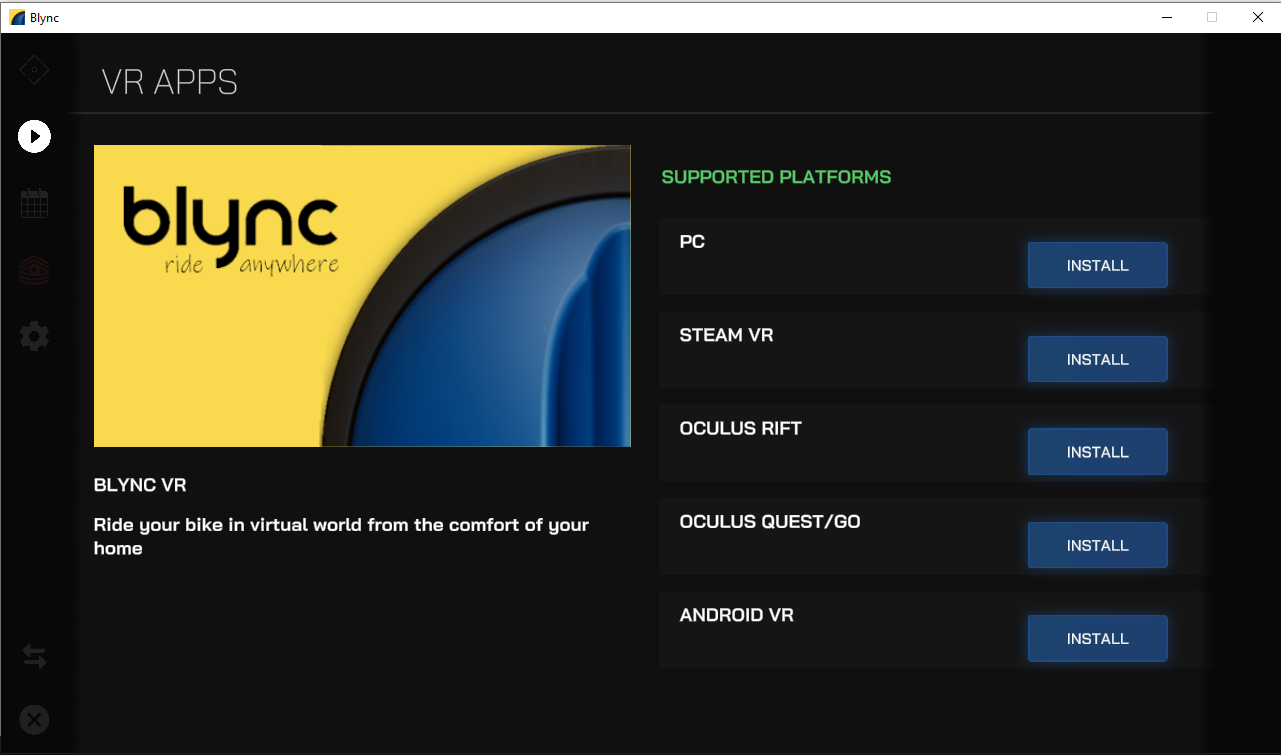 Blync VR app is where the action lives. After setting up your account with the Blync companion app and setting up your bicycle with Blync sensors, you need to install Blync VR app for your VR device. Different platforms needs specific VR app to install and run. This is made easy through the Blync companion app which has a VR Apps section to install and run the VR app for most platforms. Below are supported platforms and a few of their requirements.

Just like Steam VR, you need to have Oculus software installed on your Windows 10 PC. Once installed, you can download Blync VR App for Oculus rift and run the VR app from inside the Blync companion app.

Blync VR APP for android has been tested on mid to high end android devices using Google Cardboard. It is not supported for all android devices. It requires that the android device has bluetooth hardware and it is enabled while running the VR app. The app can be switched to non-VR mode on the loading screen for those that don't want to use Cardboard device.

You can run Blync VR app on a PC for those that don't have a VR device. Running on PC requires that you use your mouse to move the head tracker and make menu selections.